At Legs Eleven, along with online slots and live casino, we take great pride in our offering of online bingo! Online bingo is very popular to play at Legs Eleven with a range of different bingo rooms available. All bingo rooms at Legs Eleven vary in format, features and prizes on offer, with further variations on ticket prices and schedules. If you’re wanting to find out more about bingo at Legs Eleven, check out our how to play online bingo page where we have a range of different blogs available. On this page, we are going to be discussing bingo calls and clarifying some phrases you may hear when playing bingo, both online and in a bingo hall.

What Are Bingo Calls?

Bingo calls are the colloquial terms used to announce the numbers in bingo. There are many different terms, with each number (1-90) all having its own nickname. Some of the bingo calls directly rhyme with their associated number, others may be named after the physical shape of the number or certain connotations with a number. Some bingo calls do vary and there isn’t an exact, “official” bingo call associated with a number. However, there are certainly ones most commonly used.

Before we take a lot at some of the most iconic and most famous bingo calls, we’ll take you through where bingo calls originated from and what their purpose is. Myth has it that the vast majority of bingo calls originated from East London where working-class communities speak “Cockney dialect” which involves a lot of rhyming, also known as, “Cockney rhyming slang”. For example, the word “money” is referred to as “Bees and Honey” and “stairs” is referred to as “Apple and Pears”. This common way of speaking transferred to the bingo community, where people would use rhymes to announce numbers that were drawn when playing bingo. This is now a common and integral part of playing bingo both online and in bingo halls.

There are several bingo calls that rhyme with their associated number but here are three of the most iconic:

Very straightforward, the number 3 rhymes with our favourite drink, a nice cup of tea.

If you’re a fan of Abba music then this bingo call should be pretty self-explanatory. The number 17 of course rhymes with Abba’s classic hit song, “Dancing Queen”. Not only do the words ‘Dancing Queen’ rhyme with the number 17 but in the song itself, the lyrics are “Dancing Queen, young and sweet, only seventeen”, meaning this is the perfect bingo call for this number!

The term Queen Bee often refers to a leader, particularly a female leader of a group in reference to how a female bee is usually in charge of a hive. Similarly to number 3 and cup of tea, Queen Bee simply rhymes with the number 73 and is quite catchy to say.

Yes, that’s right! Legs Eleven! This is the bingo call that this online casino is named after and is one of the most recognisable bingo calls there is! Quite self-explanatory, “Legs Eleven” refers to the number 11 looking like a pair of legs. Just look at our logo!

One of the most popular and visual bingo calls is “Two Little Ducks”, referring to the number 22 as it (kind of) looks like two little ducks. Bingo players may often accompany this bingo call with “Quack Quack!” just in case you forgot what ducks are!

Kelly’s Eye is a reference to Ned Kelly, an Australian outlaw who famously wore a helmet with an eye hole that looked like the number 1.

This is another very self-explanatory bingo call, as the number 13 is notoriously known for being unlucky.

For any lovers out there, they will recognise the 14th of February as being Valentine’s Day. This is why the number 14 is referred to as “Valentine’s Day” in bingo.

65 is traditionally the age where residents of the UK can collect their pension, so this is why this call is associated with this number.

Like we’ve previously mentioned, some of these are not set in stone and different bingo announcers may use different calls for numbers. However, below is a list of some of the most popular bingo calls that you could hear! 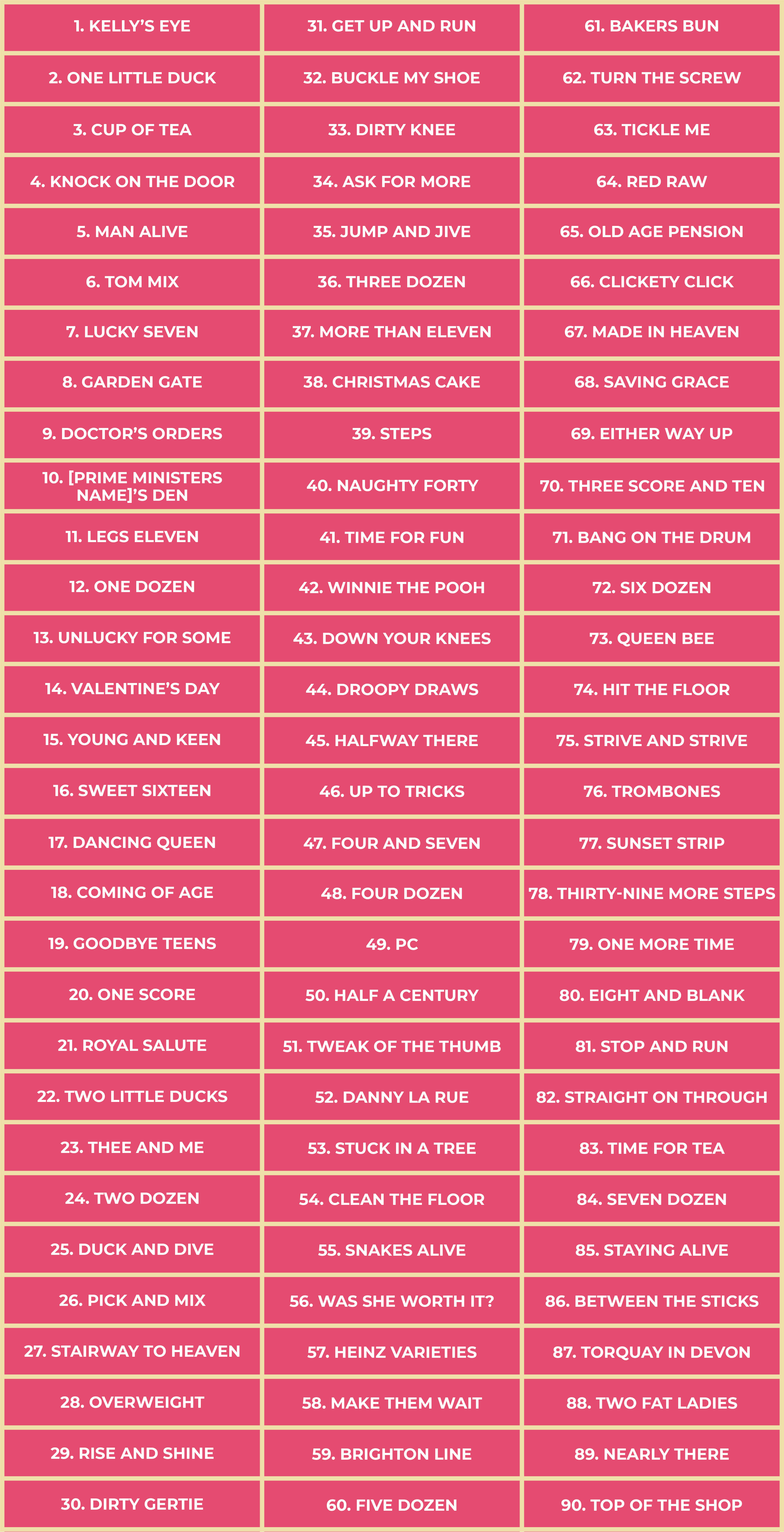 Thank you for reading our blog on bingo calls! If you ever hear one of these terms when playing online bingo, you’ll know what number they are referring to before they actually say it!